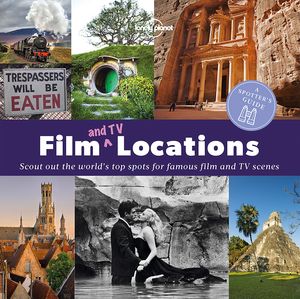 How many scenes can you tick off? Films featured range from La Dolce Vita in Rome to Gladiator in Morocco. and TV series settings include Game of Thrones in Dubrovnik and The Bridge in Scandinavia, all selected by a film critic. Find the locations near you and be the star of your own show!

The movies take you places: cinema is a mode of transport. In just 90 minutes, you can be whisked all the way around the globe  perhaps with a dotted red line marking your progress on a map as you go. Some films take you even farther, out of this world and to other galaxies far, far away.

And conversely, there are some places that can transport you into the world of a movie. If you want to feel like James Bond, try going to James Bond Island. In a Holly Golightly mood? Have a danish pastry and some coffee outside Tiffanys in Manhattan. Or want to feel like Rocky? Then run up the steps to the Philadelphia Museum and put your hands in the air like a champ when you get to the top.

This book is about the real-world places that provided the backdrops and settings for some of our most memorable collective dreams. Some of these locations played themselves and others were dressed up to look like somewhere else. But they all added texture and colour and weight to the visions of our best TV- and film-makers.

Who needs CGI when the real world looks as fabulous and varied as this?